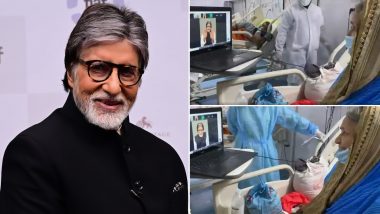 Shashikant Pedwal, a lookalike of Bollywood megastar Amitabh Bachchan, has come into the limelight among people due to his funny and comic style. Shashikant, who looks exactly like Big B, is seen spreading positive energy among the people battling this epidemic during the Corona period. He is talking to the patients battling Corona through video calls and entertaining them.

Shashikant is actually a teacher who imitates Amitabh Bachchan on stage for the last 12 years. Seeing his style and style, people consider him a carbon copy of Big B. He often uses this style of his in his social work as well. Shashikant, a resident of Pune, has taken the initiative to share happiness among corona patients in this era of epidemic. In this way, by keeping the patients away from stress, they take care of their illness out of their hearts.

It was told in the media reports that at first many private hospitals rejected their desire to entertain the patients. Pedwal said, “I decided that I will go to the government hospital and entertain the people but that too took time because I needed some staff who would help me meet the patients there.”

During his virtual interactions, Pedwal motivates people by reiterating Amitabh Bachchan’s dialogues, his poems. In his style, he molds Big B in such a way that it is difficult for anyone to believe that he is not the real Amitabh Bachchan.

Life came to Mumbai with 26 rupees, became the first Narad Muni of Bollywood