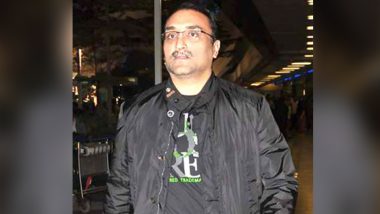 Mumbai, June 8 : A Covid Vaccination Campaign has been started for the workers of the film industry at Yash Raj Films (YRF) studios, which aims to vaccinate around 4000 workers in the first phase. Launched by filmmaker Aditya Chopra, the campaign will facilitate the resumption of day-to-day activity in Bollywood.

Akshay Vidhani, Senior Vice President, Yash Raj Films said, “After vaccinating all the employees at YRF, we started vaccinating the crew members of our films. Now we are happy to start the vaccination campaign for the Hindi film industry. For this the daily wage earners of our industry will return to work and provide financial stability for themselves and their families.” Also read: Chellam Sir Memes: This character of ‘The Family Man 2’ can replace Google too, see these funny memes from ‘Chellam Sir’

Vidhani said, “Given the large number of vaccines required to cover the industry, the campaign will be in phases. In the first phase, which starts today. We will be able to vaccinate at least 3,500 to 4,000 people .YRF is committed to helping the industry hit by the pandemic restart.”

YRF aims to vaccinate 30,000 registered members of FWICE (Federation of Western India Cine Employees). The company has already vaccinated its employees in a campaign inside the YRF studio in Mumbai.

Sunny Leone gave such a scene for the shooting of the film, you will be surprised to see

Mumbai. Friends, let us tell you that Corona has eclipsed the release of Bollywood’s Khiladi Kumar i.e. Akshay Kumar and Katrina Kaif starrer film Suryavanshi. The film has been waiting for release for a long time. But now there is good news for the fans waiting for Sooryavanshi that this film of Akshay can be released on August 15 this year.

Friends, let us tell you that the trailer of Suryavanshi got a tremendous response from the people. Friends, cameos of Ranveer Singh and Ajay Devgan have also been kept in this film. Akshay Kumar will be seen as a policeman in Rohit Shetty’s directorial Sooryavanshi. Fans are eagerly waiting for the release of this action packed movie. Many times the release date of the film has to be pushed forward.

Karishma Tanna’s stylish style in mini skirt, people were crazy after seeing her

Actress Karishma Tanna, who entered the world of television in the year 2001 with the serial ‘Saas Bhi Kabhi Bahu Thi’, is not interested in any identity, she has also worked in blockbuster films like Sanju and she is also seen in Khatron Ke Khiladi and Bigg Boss. has arrived.

Karishma Tanna is one such actress who always remains the subject of discussion about her photoshoot, recently she has posted some pictures, in which she is looking very hot in blue color mini skirt and in these pictures she gives stylish poses. It seems that these pictures are being liked a lot by the people.

For your information, let us tell you that Karishma Tanna always shares her hot pictures on social media and many times she has set the internet on fire with her bikini look. 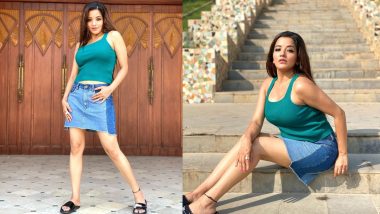 Bhojpuri cinema’s hot actress Monalisa knows very well to injure everyone with her murderous acts. Everyone likes her glamorous look. Monalisa also shows her style fiercely on social media. She keeps sharing new pictures and videos every day. In such a situation, now Monalisa has once again done very hot pictures.

In this post, Monalisa is seen in a western look. Monalisa looks amazing in black colored jeans and gray top. Seeing such a look of Monalisa is no less than a treat for the fans. So at the same time, Monalisa also did not lag behind showing her killer pose. Also read: Monalisa Hot Photos: Bhojpuri actress Monalisa flaunts her glamorous avatar in western look, shares heart-wrenching photo

On the work front, Monalisa, who plays a witch in the TV show ‘Nazar 2’, is often seen experimenting with her style. These days he is being seen in the TV show Namak Ishq Ka.