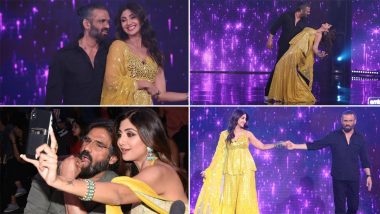 Bollywood’s beautiful actress Shilpa Shetty celebrated her 46th birthday on Tuesday. On the birthday of the actress, all her fans and well wishers sent her congratulatory messages. Even his friends from Bollywood congratulated him on his special day. Shilpa’s film ‘Dhadkan’ co-star Sunil Shetty wished her birthday in a very different way.

Congratulating Shilpa on her birthday in the style of her character from ‘Dhadkan’, Sunil tweeted, “You can’t forget me, I can’t forget your birthday, it can never happen Anjali. Shilpa Shetty wish you a happy birthday.” Many congratulations.”

To this, Shilpa also replied to her ‘Dev’ (Sunil Shetty) in her character of Anjali and wrote, “Uff Dev, thank you very much.” Let us tell you that Akshay Kumar and Sunil Shetty were in the lead role with Shilpa Shetty in the film ‘Dhadkan’ released in 2000. This love triangle based film won the hearts of the audience and proved to be a hit.

I’m filled with gratitude, and overwhelmed with all the love & blessings that you’ve showered on me❤️🧿🙏🎂🤗

Thank you for all your messages, calls, cakes, & flowers; & for making my birthday so special❤️🧿💫

Talking about Shilpa Shetty’s 46th birthday, the actress posted a video of herself thanking her family, friends and fans for the immense love she received from her, in which she was seen celebrating her birthday.

These two actresses clashed on Twitter, said these things to each other

Fast & Furious will screen at Cannes Film Festival on July 9