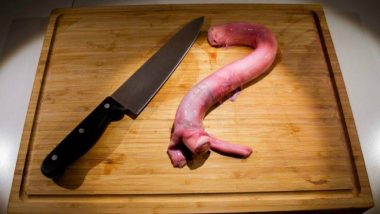 Shocking! It is very common for husband and wife to quarrel over some matter, but sometimes the fight between the two increases so much that it also becomes the reason for some serious crime. One such shocking case has come to light from Brazil, where a husband and wife had an argument over separation and the angry wife first killed her husband in self-defense. Then cooked her husband’s penis in a frying pan. According to the report, 33-year-old Dayane Cristina Rodrigues Machado was arrested by the police in Sao Goncalo, Brazil, on June 7 for carrying out this horrific incident.

Officers were called to the couple’s home in the neighborhood of Santa Catarina, where the victim’s body was found naked and mutilated. He was identified as Andre. According to officials, the victim’s wife had killed him and cooked his penis in soybean oil in a frying pan. Also read: Shocking! Husband was popular among women, due to jealousy, wife cut her penis while sleeping, know where this incident happened

According to reports, they believe that the incident was carried out around 4 in the morning, when there was an argument between the couple about their separation. The police seized a knife from the spot, which is said to have been used by her to kill her husband. Also read: Shocking! Girlfriend cut off sleeping lover’s private part, took this dreadful step on suspicion of cheating

Significantly, Machado, who was caught by the police, has been accused of killing her husband and mutilating his body. According to reports, both of them lived together for 10 years and were living separately for two years, despite this both of them kept seeing each other again and again. They have an 8 year old son and a 5 year old daughter. It is said that the couple used to run a pizzeria together. However, it is not yet clear whether their children were present at the scene of the incident or not.

C-sections will account for one-third of all births by 2030: WHO