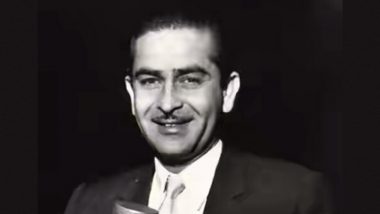 Raj Kapoor Death Anniversary 2021: For Hindi cinema, Raj Kapoor was not just an actor, director, writer or producer, but a brand, a symbol. Raj Kapoor means an institute, Raj Kapoor means ‘RK’, ‘Romantic Heroism’, Great Showman, ‘Kapoor Khandaan’, whose fourth generation is still ruling the industry. It has been 33 years since this great personality of Hindi cinema left the world, but even today cine-lovers have not forgotten his magical image, let us share some memorable moments of his memories.

The show-man flourished in the furnace of struggle!

Raj Kapoor was born on 14 December 1924 in Peshawar (now Pakistan). He also had to bear the brunt of partition. Father Prithvi Raj Kapoor was a theater artist. Raj Kapoor had two brothers Shashi Kapoor and Shammi Kapoor. Before trying his luck in cinema, he had to hammer nails on the sets, sweep the studio, offer water and tea to seniors, slap director Kedar Sharma. He became Raj Kapoor only after passing through so many examinations.

Prithviraj Kapoor got the strength to bear the struggle!

In a meeting held at RK Studio, Raj Kapoor himself had admitted that Papaji (Prithviraj Kapoor) had a big hand in his becoming Raj Kapoor. Experts say that when Raj Kapoor told his father that he wanted to work in films, then he said, first consider the studio. He got Raj Kapoor a job of one rupee per month in the studio. Raj Kapoor’s job was to hammer nails on the set, to sweep, to make people drink tea or water. It is said that one day it was raining a lot in Bombay, Raj Kapoor asked his mother to go to school in Papaji’s car today? Prithviraj said sometimes enjoy the rain too. Then as usual, Raj Kapoor reached the school by tram.

Something like this was composed ‘Don’t look at the twisted…’

The 5 main pillars of Raj Kapoor’s team were Shankar, Jaikishan, Shailendra, Hasrat Jaipuri and Mukesh. Once there was a chance to meet Hasrat Jaipuri, he shared some things from the moments he had with Raj Kapoor, – Raj Saheb would often gossip with his team in a cafe located near the Churchgate Hotel. One day everyone was sitting. Some girls came out of Churchgate and started going towards KC College. In us, Jaikishan was a little beautiful and kind, when a beautiful girl came out from the side, Jaikishan started staring at her. The girl turned back, then moved forward, then looked back, Jaikishan said, ‘Mud twist ke na dekh’. At that time the matter had come. At around one o’clock that night, Raj Saheb got a call that everyone should reach Mahalakshmi in an hour. Who could have avoided the talk of Raj Saheb? When everyone reached Mahalakshmi, they were stunned to see that Raj Saheb was already sitting. He told Shailendra that you said ‘Mud mud ke na dekh’ in the afternoon, I want a song for ‘Shree 420’ in the same mood. Raj Saheb composed the tune with Shankar Jaikishan at the same time. The next day that song was recorded in the voice of Manna Da. Filmed on Nadira, this song became a super hit.

Even Pandit Nehru was surprised by Raj Kapoor’s popularity in Russia!

According to a senior journalist, Raj Kapoor was very popular not only in India, but also in Russia, Japan, America, Britain, China and Pakistan. In this context, he told an anecdote, – It is from the 50s. Prime Minister Pt. Jawaharlal Nehru had gone to Russia. There the Russian Prime Minister Nikolai Bulganin was called after a brief speech by Pandit Nehru at the dinner organized by the Russian Delegation. When he started singing ‘Awara hoon…’ with his cabinet, the people sitting there were astonished. Everyone applauded and applauded. Pandit Nehru was also surprised to hear that Raj Kapoor’s popularity had reached there before him. On his return to India, he called Raj Kapoor and told everything. In this context, Ritu Nanda, daughter of Raj Kapoor, had told that in 1993 when Russian President Boris Yeltsin came to India. Ritu Nanda expressed her desire to meet him. As soon as Boris Yeltsin came to know that Ritu was Raj Kapoor’s daughter, he immediately called him and told that he liked his father i.e. Raj Kapoor very much.

That innocent look of Dimple in Bobby!

Raj Kapoor was truly such a filmmaker, who did not consider small things as meaningless. There is an incident in 1948, Raj Kapoor was Kedar Sharma’s assistant. Nargis had become a big star. Raj wanted to cast Nargis for his film ‘Aag’. They went to Mahalaxmi, where Nargis was shooting for ‘Romeo Juliet’. But Raj Kapoor did not find this place suitable to talk to Nargis. The next day he went to Nargis’s house. Nargis was frying the dumplings. Raj Kapoor rang the doorbell. When Nargis opened the door after a while, Raj was surprised to see that Nargis’s hair and face were covered with gram flour, which might have been inadvertently removed from the forehead while opening the door. Raj liked this act of Nargis so much that he created a similar scene during the shooting of Bobby and made it suit on Dimple.

Sonu Sood lives in this luxurious and luxury house, you will be surprised to see the pictures