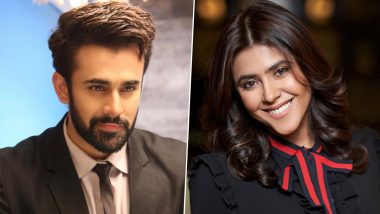 Pearl V Puri Case Update: Television actor Pearl V Puri was recently arrested by the resident police for molesting and raping a minor girl, after which she was sent to judicial custody for 14 days. A case was registered against the actor for rape as well as under the POCSO Act and the matter is being investigated.

After the news of Pearl’s arrest came to light, many celebrities including Ekta Kapoor, Rakhi Sawant, Anita Hassanandani, Aly Goni shared the post on social media supporting her. In this case, Ekta Kapoor also talked to the mother of the victim girl, which she had given information on her social media. Ekta had said that the allegations against Pearl are false and the girl’s mother herself has also accepted this fact.

Now the audio of the conversation between Ekta Kapoor and the victim’s mother has been leaked on the internet, in which she is seen explaining to them. Ekta is telling them that the allegations made in this case are false and the girl’s mother is also accepting this fact. At the same time, Ekta is telling them that due to this matter, not only the girl’s name is getting maligned but Pearl’s life will also be ruined.

It is worth noting that while Ekta is calling this case false, Vasai Police DCP Sanjay Kumar Patil said that she has evidence against Pearl in this case and hence she has been arrested. The truth will come out soon in the investigation.

Throwback: When Smita Patel cried all night after shooting a song in the rain with Amitabh Bachchan

Success Tips: If you want to get success then follow these tips

Oscar-nominated character actor Ned Beatty, who has appeared in several films including “Deliverance” and “Superman”, has died of age-related health problems.

Not much information is available about the exact circumstances of his death. However, international media confirmed that he did not pass away due to COVID-19. Beatty’s career spans over five decades. He acted in many iconic films and played many memorable roles. He is best remembered for his extravagant monologue in 1976’s ‘Network’, in which he played a television chief who tries to convince the protagonist to stop opposing a major merger deal that the public. would adversely affect him, and it earned him a Best Supporting Actor nomination. at the Oscars that year.

Beatty’s first film role brought him permanent notice in the 1972 film “Deliverance” as one of four men from Georgia who go on a harrowing canoe trip. He was nominated for an Academy Award for Best Supporting Actor for 1976’s “Network,” played Otis in 1978’s “Superman,” and went on to play countless other theater, TV, and film roles.

The late star also appeared in several big hit television shows such as ‘Law & Order’, ‘Roseanne’, ‘The Boys’, ‘Highway to Heaven’, ‘American Playhouse’ and many more. Beatty is survived by his wife, Sandra Johnson, his eight children and grandchildren.