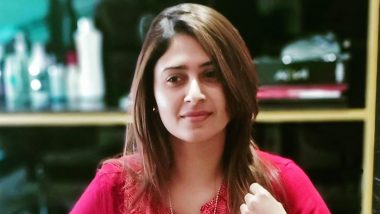 FIR Against Lakshadweep Filmmaker Aisha Sultana: The Lakshadweep Police has registered an FIR against filmmaker, actress and model Ayesha Sultana for her controversial statement. The actress recently targeted the central government during a TV debate, saying that the Kovid-19 epidemic is a bio-weapon which the government has used against the people of Lakshadweep.

After this statement of Ayesha, there was a lot of controversy and many people also opposed her statement. After this, now the police have registered a case of sedition on Ayesha. With this statement, he has tried to spread hatred in the society, due to which now the administration is also taking the initiative to take strict action against it.

Lakshadweep Police has registered an FIR against filmmaker Aisha Sultana on charges of sedition and hate speech after she, during a TV debate, said Central government had deployed COVID-19 as a ‘bio weapon’ against people of Lakshadweep

During a discussion in a Malayalam news channel, Ayesha had said, “There was not a single case of corona virus in Lakshadweep before the intervention of the central government. Now an increase of 100 new cases is being seen every day. I can say this clearly that the Central Government has used Bio Weapon against the people of Lakshadweep.”

This is Raj Kundra’s first wife, amazing in beauty! Shilpa Shetty is no less in beauty

Will Ajith be in Valimai? Yogi Babu disclosed this

Actress Varalakshmi Sarathkumar has been making entertaining videos to reach out to people to get messages and information related to COVID-19 and share them on her social media handles. even, and in other relief measures activities, keeps him busy,

Like last year, I was helping migrant workers and I realized that many of us do not know how to deal with the situation. There were so many things that amazed us. But last year taught us a lot and prepared us better for the second wave. We know what problems come with lockdown. Our organization, Save Shakti Foundation, started feeding stray animals and we continue to do so throughout the year, apart from helping victims of domestic violence and child abuse. We all understand the gravity of this disease and hope people stay at home and take proper precautions while stepping out.

You turn on a news channel and you will see deaths and infections and it is quite depressing. So, the director in me started working and came up with some videos. I have personally seen many people who wear a mask around their chin or neck, or do not cover their nose and mouth properly with it. When I spoke to a group of people, I thought they were concerned that getting vaccinated could lead to death. But I wanted to clarify that the person they are talking about died because of other complications and not because of vaccination. Some people are afraid of getting headache and fever. Even in childhood, when we used to get vaccinated, it was normal to have mild body ache and fever. So why be afraid of him now?

If all goes well with the vaccination camps, I think we can start shooting again by July-August. I have signed seven films in Telugu and I am looking forward to start working on them.