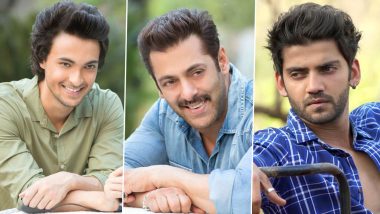 Kabhi Eid Kabhi Diwali: While Salman Khan will be seen rocking his film ‘Antim: The Final Truth’ with brother-in-law Aayush Sharma, he will once again entertain the audience with him in his upcoming project ‘Kabhi Eid Kabhi Diwali’. Will be doing it. Zaheer Iqbal will also be seen with him in the film. In this action comedy film, Salman will play the role of elder brother of Aayush and Zaheer.

According to the report of Bollywood Hungama, ‘Kabhi Eid Kabhi Diwali’ is the story of three brothers in which the younger brothers are not getting married because the elder brother has not taken seven rounds yet. The report quoted sources as saying that it was Salman’s plan to cast Aayush Sharma and Zaheer Iqbal in the role of his brother.

Salman believes that when real-life people connect, it becomes easier to express emotions properly in films as well. Salman Khan’s bonding with brother-in-law Ayush Sharma and actor Zaheer Iqbal is quite good. Farhad Samji’s film will present a funny story of these three brothers.

In the film, Pooja Hegde will be seen as the female lead opposite Salman Khan. This story will include drama, emotion, romance and action, all these things. The title of the film can also be kept as Bhaijaan and will give the message of unity in the family.