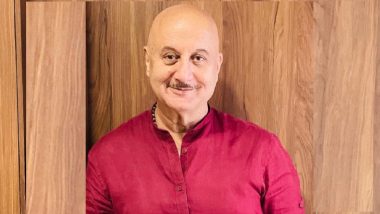 Veteran actor Anupam Kher on Thursday alleged that his followers on Twitter have come down drastically in the last 36 hours. The actor tweeted revealing the figures and said that he is curious to know whether it is a technical glitch or something.

Kher tweeted on Thursday, “Dear Twitter and Twitter India. I have less than 80,000 followers in the last 36 hours. Is there something wrong with your app or is something else happening!! This is an observation. No complaints yet. is..”

Dear @Twitter and @TwitterIndia! I have 80,000 less followers in the last 36 hours! Is there a glitch in your app or something else is happening!! It is an observation. Not a complaint….. yet. 🙂

On the work front, the actor is all set to anchor and narrate the upcoming documentary film ‘Bhuj: The Day India Shook’, the trailer of which was released earlier this week.

The documentary is about the devastating 2001 earthquake and captures survivors, rescuers, journalists, photographers. The film is scheduled to release on June 11 on Discovery Plus.

On this day last year, such a news came which surprised everyone. Actually, on June 14 last year, Sushant Singh Rajput was found dead in his Bandra flat under suspicious circumstances. During that time, people’s senses were blown away after hearing the news. Till date people have not forgotten Sushant and now today is Sushant’s first anniversary. The actor’s name is trending on social media since last evening. At the same time, Ankita Lokhande has worshiped in the memory of the actor at her house.

On the sets of the show, the two became friends and fell in love. After that gradually both of them became favorite. Both had reached the wedding but suddenly the sacred relationship broke down forever. Ankita Lokhande is a victim of people’s anger every day because people say that she has forgotten Sushant.

Arjun of India became the youngest archer of the country, got inspiration from the film ‘Bahubali’