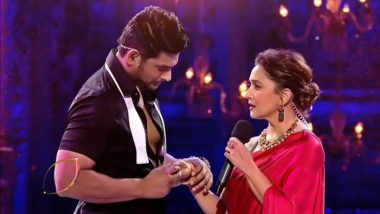 Colors TV has today posted the latest promo video of the show in which Siddharth and Madhuri have recreated the romantic bangle scene of the film ‘Dil To Pagal Hai’ as Rahul and Pooja. Posting this video, the caption was given, “When Siddharth Shukla became Rahul and Madhuri Dixit became Pooja once again, our heart was bound to go crazy.”

Also read: Sidharth Shukla recreated this romantic song with Madhuri Dixit, such a comment from Shehnaaz Gill on the video

Siddharth Shukla was here to promote his recently released show ‘Broken But Beautiful 3’ during which he enjoyed a lot with the contestants and judges of the show here. Dharmesh Yelande and Tushar Kalia are judging this show along with Madhuri.

At the age of 16, Dimple had given heart to Rajesh Khanna, the name has been associated with Sunny Deol