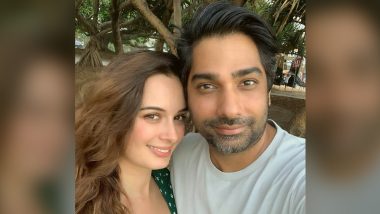 Evelyn Sharma Marries Beau Dr. Tushaan in Hindi: Actress Evelyn Sharma, who is seen in Bollywood films, has married her best friend Dr Tushan Bhindi. They married on 15 May in Brisbane, Australia. In the information given to the media, the actress told that she is very happy with this marriage and she was eagerly waiting for this moment. Evelyn got engaged to Tushaan in 2019, after which they are now married.

Talking about her marriage, the actress told E-Times, “There is no better feeling than marrying your best friend. We are very much looking forward to spending our lives together.” Evelyn’s husband Tushan is a dental surgeon from Australia. Some time ago, a photo of Evelyn and Tushaan also went viral on social media in which both of them were seen kissing each other.

Also read: Yami Gautam was seen wearing vermilion in demand and bangles in her hands, see pictures after marriage

After marriage, Evelyn and Tushaan are now preparing for their new home in Brisbane. He has also adopted a puppy named Koko.

Dilip Kumar Health: Wife Saira Banu got angry on the news of Dilip Kumar’s death, did this tweet

Birthday Special: Ekta Kapoor is the owner of property worth so many crores, know everything from house to collection of vehicles

Mumbai. Friends, let us tell you that a mountain of sorrows has broken on Bollywood actor Shekhar Suman. Shekhar Suman’s mother has said goodbye to this world, Shekhar Suman himself has given information about this sad news on social media. Social media users have been consoling the actor ever since the news surfaced.

My dear ♥ Mother whom I loved the most in this world has left for her heavenly abode today. I feel orphaned and devastated. Thank you mom for being there for all of us all the time. I will miss you till my last breath.
Thank you for all your prayers and blessings???? — Shekhar Suman (@shekharsuman7) June 18, 2021

Friends, sometime back, Shekhar Suman shared this sad news with everyone by tweeting. Shekhar wrote in his tweet, ‘My dear mother, whom I loved the most in this world, passed away the previous day. I feel devastated and orphaned. She was always there for us. I will remember you till my last breath, thank you for your blessings.

According to the news, let us tell you that Shekhar Suman’s mother was suffering from kidney disease for a long time. Along with this, his condition was also very critical for the last few days. Friends, along with Shekhar, Adhyayan Suman was also constantly sharing his pictures and videos on social media. Adhyayan Suman had also made an emotional post on social media.

See the bold avatar of TV’s cultured daughter-in-law, she is stylish in real life

You must have never seen this hot style of Sridevi’s beloved, see photos