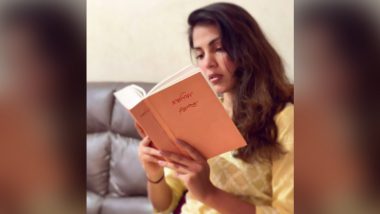 After the tremendous success of Bigg Boss 14, the makers have now started preparing for its next season. In its next season also, the makers want to include such a name which will create buzz among the audience. In such a situation, news is now coming that controversial actress Rhea Chakraborty has also been approached in this season. Although it is not clear whether Riya has agreed to this or not.

Actually, according to media reports, the last few seasons of Bigg Boss have gained tremendous popularity among the audience. In such a situation, the makers do not want to leave a gap in its next season as well. For which he is approaching many big names. In which one name is coming out, that of Riya Chakravati too. Riya has also been approached after being a part of films like Mere Dad Ki Maruti, Sonali Cable and Jalebi. Now whether Riya will be a part of it or not, it will be known only in the coming time.

By the way, this time the season of Bigg Boss is going to be very different. Because this time the common people will be given a chance along with the celebs inside the house. In such a situation, it has to be seen whether this season can live up to the expectations of the audience or not.

See some unseen pictures of Bobby Deol and Tanya’s wedding