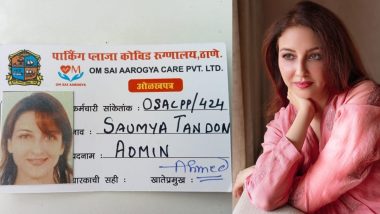 Soumya has called this ID as fake and has told the matter of getting the vaccine using it wrong. While tweeting, the actress wrote in response to a user, it is fake. Soumya writes that many media reports are claiming that I have taken coronavirus vaccine through this ID, this is completely wrong. I have definitely got the vaccine. But from the center near my house. That too completely following the rules. Please do not trust such unverified reports and claims.

Not only this, while talking to the Indian Express, Soumya said that this ID is completely fake and anyone can make such an ID, there is neither any hospital stamp nor any sign on this ID. It is very easy to make such passport size photos from my pictures on Google.